When Insurance Companies Offer You Weak Settlements, You Need Strong Attorneys.
How much is my case worth?
Farris, Riley & Pitt, LLP > Drunk Driving Accidents

In recent years, drunk driving accidents resulted in over 200 fatalities per year in Alabama alone. If you have been injured by a drunk driver, there are several things you should know. 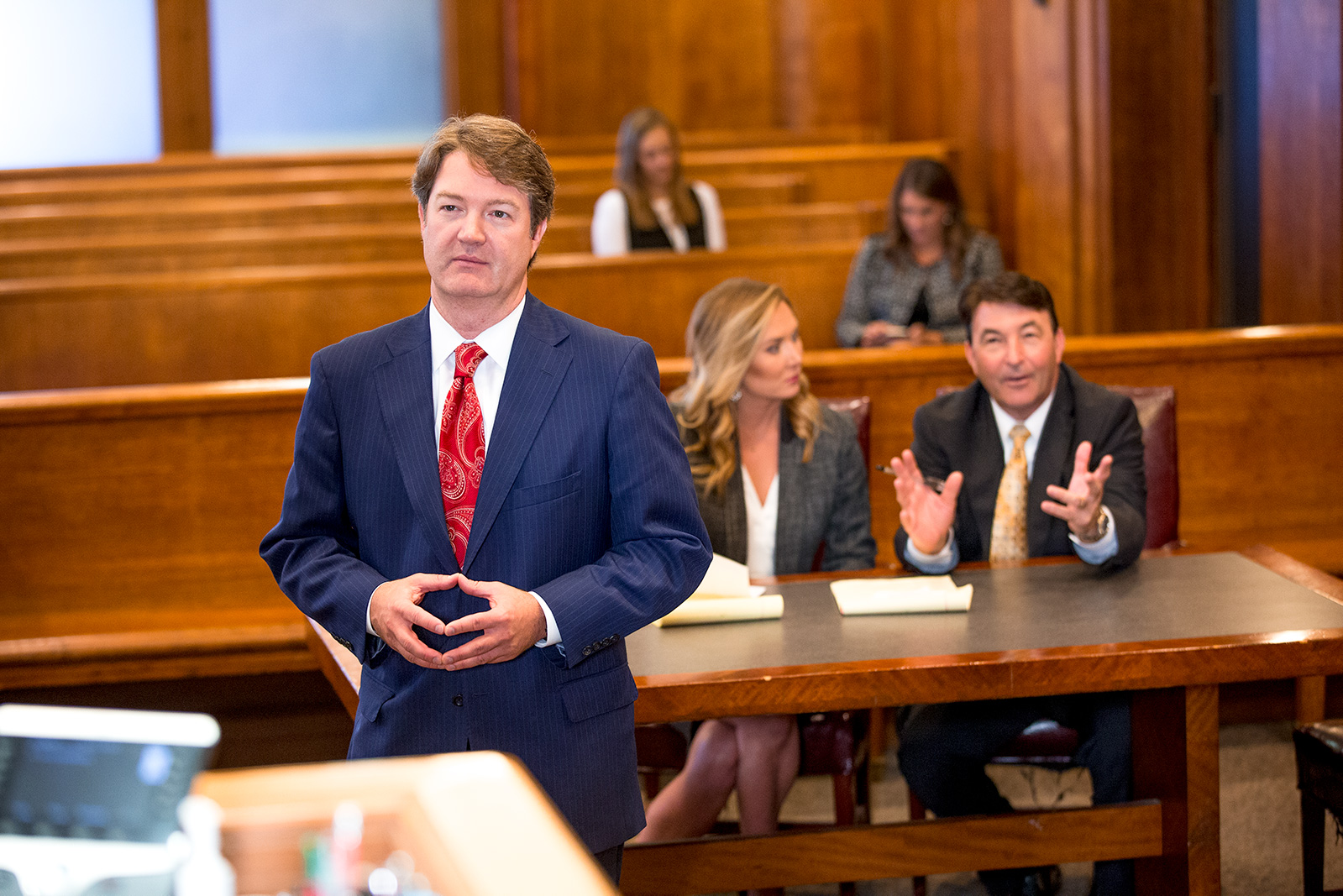 An insurance company will want to settle with you early so you do not maximize your recovery by hiring a lawyer. We strongly believe that speaking with an attorney first to evaluate your case will help you in the long run and ensure you aren’t being taken advantage of when you are negotiating with experienced insurance adjusters.

Many times, drunk drivers are not well insured, but there can be other ways to identify and trigger additional insurance coverage.

For example, the drunk driver may have been drinking at a restaurant, bar, or other establishment. If the drunk driver became visibly intoxicated at any such place, then the Alabama liquor liability laws may help you.

These laws are called dram shop laws and are designed to provide victims of drunk drivers the opportunity to recover against an establishment that served the drunk driver excessive alcohol. These establishments are legally required to carry a minimum of $100,000 in liquor liability insurance. Such policies can go a long way toward helping with medical bills, lost wages, and recovering from the harm to which you and your family have been unfairly subjected.

Please be aware that if you settle with the drunk driver’s insurance company without first making a claim against the business, you may not be able to recover against the business later. It is important that you consult a Birmingham drunk driving accident lawyer about this issue before you decide to settle with any person, insurance company, or business. Please call us at (205) 324-1212 to learn about who may be held responsible in your case.

Why Do I Need a Drunk Driving Accident Lawyer?

If you or your loved one were injured in a crash caused by a drunk driver, you are likely overwhelmed with a number of pressing concerns. You could be facing numerous medical bills while dealing with the inability to return to work.

The drunk driver’s insurance company may contact you and try to offer a settlement to resolve your case, but this settlement is very likely to be far less than what you are entitled. The establishment that overserved the drunk driver is highly likely to deny wrongdoing and will most likely offer you nothing.

An injury attorney will be extremely beneficial for you, not only because he or she can identify all possible liable parties, but also because the injury attorney knows how to hold them accountable. Civil actions for these types of claims can be complicated, but an experienced lawyer knows the best ways to approach these cases so you can recover all the compensation you deserve.

Farris, Riley & Pitt, LLP understands the numerous ways in which drunk driving accident victims can have their entire lives turned upside down. Our firm represents all clients on a contingency fee basis, so you do not need to worry about paying us anything unless you receive a financial award.

When you have been injured in a crash caused by a drunk driver in the greater Birmingham area, Farris, Riley & Pitt, LLP can provide the kind of dedicated legal representation you are seeking. We know how to approach these cases and work to help clients achieve the most favorable outcomes possible.

As soon as you hire our firm, we will immediately begin an exhaustive, independent investigation of your accident. We know which types of evidence to look for and obtain – not only to help prove the driver’s negligence, but also to hold the person or business that served alcohol to the drunk driver.

Keep in mind that the automobile insurance limits for most drunk drivers can be reached relatively quickly, and while they may still be held personally liable for damages in excess of those limits, most drunk drivers rarely have the necessary personal wealth or assets to pay such judgments. In many cases, such individuals can avoid paying victims by filing bankruptcy.

These types of issues are exactly why it is important for a drunk driving crash victim to quickly retain legal counsel, because you will want to know who else could possibly be held liable for the damages you or your loved one have suffered. Farris, Riley & Pitt, LLP knows how to identify every single party that can be held civilly liable.

In Alabama, any person injured by an intoxicated person has a right of action against the person who sells, gives, or otherwise disposes of alcohol to another person. This is Alabama’s dram shop law. The law also allows for the award of exemplary damages, more commonly referred to as punitive damages.

Dram shop claims are typically broken into two types of liability: vendors and social hosts. Typically, vendors are licensed establishments, such as bars or restaurants that legally sell alcohol, while social hosts are usually private persons who serve alcohol on their own premises.

The Alabama Alcoholic Beverage Control Board not only controls the licensing of establishments that serve alcohol but also has regulations that govern the service of alcohol. Under the Alabama Board Administrative Code, referred to as the Alabama ABC Code, both on-premises and off-premises licensees, employees, and agents are prohibited from selling, furnishing, or giving any alcoholic beverage to any person when they appear to be intoxicated.

Dram shop claims involving drivers of legal drinking age will require proof that that the driver was already intoxicated in order for a vendor or social host to be held civilly liable. If the drunk driver was a minor, the level of intoxication is irrelevant since serving alcohol to a minor is a violation of state law.

Drunk drivers may cause accidents that result in catastrophic injuries for victims. People involved in these types of crashes may sustain injuries such as:

In some cases, drunk driving accidents will result in fatal injuries. In such cases, a victim’s family may be able to file a wrongful death lawsuit against the drunk driver and the vendor or social host.

It is important to note that Alabama law also says that if the drunk driver dies too, the action or right of action survives against their executor or administrator. However, accident victims only have a limited amount of time to pursue these claims.

Alabama law imposes a two-year statute of limitations on most injury claims. Considering the extensive investigations that may be required in a drunk driving accident case, you should contact Farris, Riley & Pitt, LLP as soon as possible so you do not lose your ability to hold all negligent parties legally liable.

Any negligence on the part of the victim that proximately contributes to their injury is considered contributory negligence. While most other states use a comparative negligence system in which civil awards may be reduced because of a victim’s negligence, the contributory negligence affirmative defense in Alabama can prohibit a victim from recovering anything at all. A defendant is required to prove the victim’s negligence in order for this claim to be successful, and a victim may still be able to claim that drunk driving satisfies the state’s definition of wantonness under Alabama § 6-11-20: “Conduct which is carried on with a reckless or conscious disregard of the rights or safety of others.” Still, a drunk driving accident victim should avoid making any kind of recorded statement to an insurance company because of the potential effects that a contributory negligence claim could have.

Can a drunk driver still be held civilly liable if they are not convicted of DUI?

Absolutely. A civil action against a drunk driver is completely separate from their criminal case. In a civil case, a victim is seeking financial damages from the drunk driver, but the criminal case is filed by the state in an effort to punish the drunk driver. Perhaps the best example of this difference is the infamous cases of former pro football star O.J. Simpson. While Simpson was acquitted of murder in his criminal trial in 1995, a jury found him liable for the wrongful deaths of Nicole Brown Simpson and Ron Goldman, awarding the victim’s families $8.5 million in compensatory damages and $25 million in punitive damages.

How do I prove that a person was already intoxicated when they were served alcohol?

Undoubtedly one of the most challenging aspects of any dram shop claim is proving that an adult of legal drinking age was already intoxicated when they were served alcohol. Virtually every establishment will claim that they had no idea how drunk the person actually was, whether true or not. In such cases, intoxication may be proven through a combination of direct and circumstantial evidence. Farris, Riley & Pitt, LLP may be able to obtain bar tabs that show exactly how much alcohol was consumed and the time period in which it was consumed. Toxicology experts can testify as to how such amounts should have been indicative of intoxication. In other cases, witnesses may have seen the drunk driver while they were at the establishment and can offer similar testimony.

Mothers Against Drunk Driving reported that Alabama has 279 annual deaths caused by drunk driving. These fatalities represent 27 percent of the total traffic deaths.

The Alabama Department of Transportation reported that less than 1 percent of average crashes end in a fatality, but the proportion of fatal crashes involving DUI was 7.6 times that of crashes in general in 2016.

The lawyers of Farris, Riley & Pitt, LLP have more than 100 years of combined legal experience handling these types of cases. We are well aware of the challenges victims face in recovering compensation for their injuries, and we know how to overcome those challenges.

If you suffered catastrophic injuries or your loved one was killed in a drunk driving crash anywhere in or around Birmingham, a surrounding area of Jefferson County, or anywhere else in the state of Alabama, do not wait to contact our firm. You can have our lawyers provide an honest and thorough evaluation of your case when you call (205) 324-1212 or contact us online to set up a free consultation.